Sipgate provide SIP account numbers with alphanumeric sub-accounts. The sub-account extension needs to be removed in order for FreePBX to generate the trunks inbound route.

The following has been added to extensions_custom.conf

and the following added to the trunks PEER Details

After some pontification on how I want to setup the network in my new house, I’ve decided I need to have a dedicated comms PC in order to manage the various new and existing VPN connections between existing networks.

I’ve successfully been using Centos 7 for development at work, so have decided to use this OS for the new comms PC. 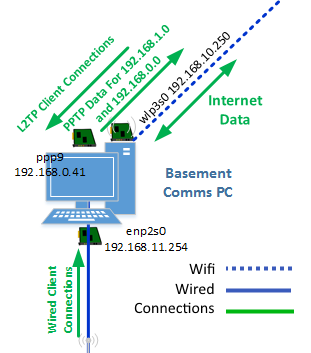 Within the bigger picture, the new network will also need to serve a wifi network for the other tenants on the 192.168.10.0 subnet, which needs to be kept reasonably secure and separate from the VPN data on the 192.168.11.0 subnet. 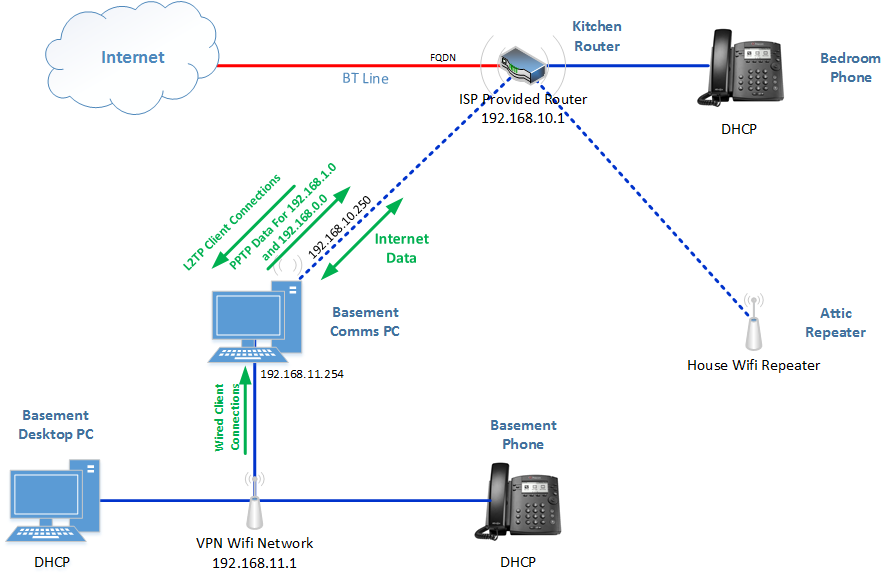 Part 1: setting-up the comms PC to act as a NAT gateway between the two networks.

For this I’m using a wireless card to access the tenants wifi (192.168.10.0) and an integrated ethernet NIC to connect to the Switch/Wireless Access Point for my private network (192.168.11.0). The first set of instructions which proved vaguely helpful were here

Unfortunately the instructions are slightly outdated, as CENTOS 7 uses the firewalld service, not iptables for firewalling the interfaces.

Redbranch.net have an article here, explaining pretty much what I needed to do to configure firewalld.

Static routing then needed a bit of work at this point. “sudo route -n” revealed that there were two default gateway routes, one for each interface, however the wired interface does not have access to the internet. Further, the metric of the wired interface was giving priority to internet traffic via this (dead) route – I assume its some kind of default in CENTOS to give wired adapters a higher metric than wireless adapters (makes sense under usual circumstances). More info about static routing here.

Annoyingly, at around this point the PC hung, and needed a reboot. This uncovered further issues:

Once these were resolved, I was able to identify the following issues with my configuration.

At this point I could now access the internet on the basement desktop PC, and the basement IP phone should now be able to register.

Part 2: Establishing PPTP connectivity back to the existing network.

Good question! I’m choosing to use this compromised protocol because the main router (Provided by ISP Talktalk) on the existing network does not allow forwarding of all the needed TCP ports in order to use L2TP. This is very frustrating, as the comms PC I’m building otherwise wouldn’t need to have the L2TP server (mentioned later) if the main network could host one.

The guide found here pretty much covers everything. To my shock at the end of the guide the following GUI on my windows server indicated that the PPTP route was open.

However, these changes will not persist if I reboot. This is where the ip-up and ip-up.local files come in.

ip-up is run after each call to pppd, ip-up in turn then calls ip-up.local which should contain the local variables. ip-up.local uses the case syntax in order to establish which routes to add based upon the parameters which are handed to it from the ip-up script.

At this point I decided that an icon on my desktop may be handy for establishing the vpn connection manually. A desktop object starts the following script in persistent mode.

The Auto-FE_PPTP.sh script now needs to be run at startup. the following guide explains how to do that here.

I’ve only realised this one when i was using my laptop, then tried to connect to the same resource from my mobile phone.

A rogue statement in ipsec.conf is applying the wrong subnet filter to road warrior connections. This can be confirmed by running “strongswan status”.

Hash the following statement from ipsec.conf

And restart strongswan. Strongswan Status should now look something like

This can be confirmed by accessing resources on the host network from each of the road warriors simultaneously.

A great unit even if it is 10 year old tech, only £20ish on eBay. However it comes with international settings as default. International dial tones and lack of disconnect supervision could result in a difficult and expensive situation for users.

I’ve applied the following settings for UK use. There are many more settings which could be changed – I’ve just not had the need to use the features needing these tones yet.

Full details are in the manual, here 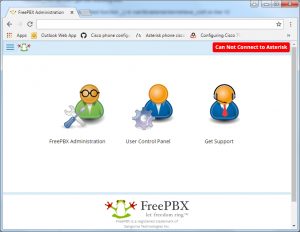 I’ve been getting an error when trying to administer Asterisk through FreePBX. Asterisk logfiles would only indicate that there was an authentication error every time I loaded the FreePBX GUI. This has prompted me to want to change the password used by FreePBX when communicating with the AMI. After trawling through many many .conf files, I discovered FreePBX in my case was getting the AMI credentials from the Asterisk MariaDB table shown below.

I had to install HeidiSQL on my windows desktop, and make changes to the database permissions to allow connections from my local subnet.

After this, I could login, but not update settings. To resolve run

And the dashboard works!
…still getting errors when trying to reload config.

Its taken a few hours work, but the below settings seem to work for incoming calls on Draytel to my Asterisk installation

These are loosely based on the settings described here:
https://support.voiptalk.org/hc/en-us/articles/115006438427-Configuration-of-a-FreePBX-with-a-VoIPtalk-trunk